Ever since I got in to Home Automation I fancied having some electric curtains and blinds but the main stream stuff like Somfy is expensive. I started a thread a while ago here on the Micasaverde Vera user forum talking about options for cheaper electric curtains and how to go about possibly Z-waving them up. Mainly looking at China specials on sites like Aliexpress.com. In the end I never got around to purchasing anything.

Recently I revisited the thread I had started again to find lots of new input from other users and it seems the general consensus for curtain rail tracks was to use the standard Dooya motors, which was one of the companies I originally discovered during my initial research. As it turns out Dooya is a high quality China brand and I believe Somfy have bought in to them as well!

The motor I am going to be using is the Dooya DT52S which is an AC motor, S being the important part of the model number as there is also a DT52E model. The S is a standard motor with no inbuilt RF controller. There are 3 different versions of the DT52S motor 45W, 60W and 75W which can handle different weights of curtain material. You can also get Dooya DC motors but they tend to be more noisy in my experience of seeing the difference between the Somfy AC and DC motors.

More details about the Dooya tracks and motors can be seen here on their website. Also here is a Dooya promotional video.

The tracks are driven by a rubber belt rather than metal wires like in some of the other lower quality kits you can find online, which makes for quieter operation.  You can get straight or bent / curved tracks.

I ordered a 2.3 metre straight track and motor for my living room window, from a Chinese supplier on AliExpress which was recommended to me off that Micasaverde forum thread. The company is called Friend Group and I spoke to a guy called Scott. I was told on the forum that I wouldn’t see a product page for exactly what I wanted to order, but you have to contact them and request what you want and then they sent me a link to a product page to make a purchase. I still needed to enter in to the “message to seller” box at checkout, confirmation of my requirements which were:
I also sent them photos of my living room window area just to be on the safe side, so they could see what I was talking about.

UPDATE: Friend Group have created a whole new product page for the Dooya DT52S motor and curtains rails as a result of this series of blog posts, which should make ordering for you simpler.

NOTE: If you do place an order with Friend Group, please tell them you were referred to them by “The Media Center Blog”.

For this 2.3 Metre track and motor the cost was only £50.95 GBP. However postage was £33.27. I also had to pay some UK customs import VAT tax on top of that, which was £22.50 (think they over charged me) and an additional £13.50 for the Parcel Force International (UK) handling fee which I wasn’t expecting, so the grand total was £120.22 landed. However I still think it was fairly cheap considering when you look at other prices for other curtain track systems and I am confident these Dooya motors will be of good quality.

The Dooya motor can be fitted to either end of the track left or right is OK, I plan to have mine on the left hand side.

Friend Group will even customize the track to the exact length you require, so I bought a 2.3 Metre track but my actual width requirement is 225 CM. This saved me the hassle of having to take apart the track and get out my hack-saw, nice one!

You can also get ceiling fixings instead of wall mount fixings and you can have a One-Way Draw (Side opening) for say a single curtain rather than the traditional two curtain centre opening as I required.

This is the living room window area showing the width dimension. 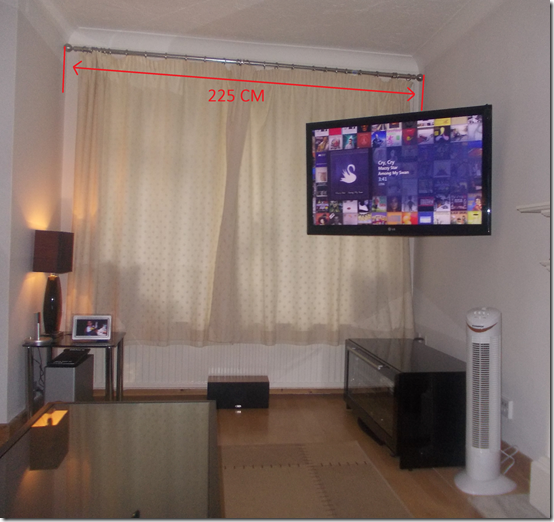 This is the small window to be covered. 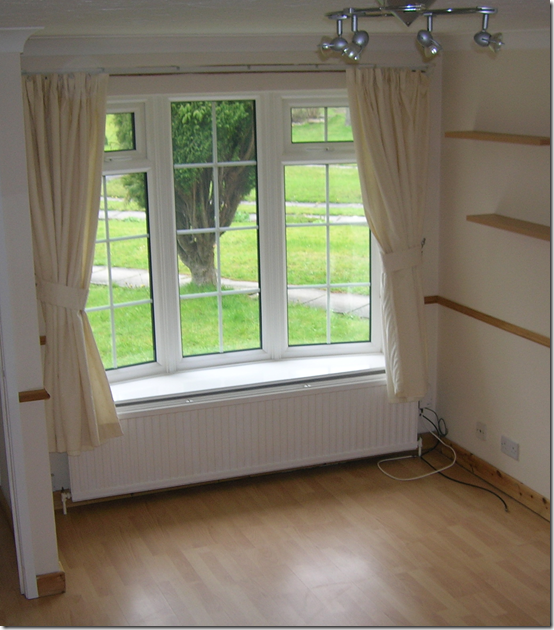 So now you need a Z-wave blind control relay module. There are many on the market and I expect most would work with this type of curtain motor. I am going to be using a Fibaro Blind Control Insert 2.

Product number FIB_FGRM-222. Fibaro has traditionally been for EU Z-wave frequency but I believe you can now also get these inserts in US frequency as well.


I found a really nice blog post by a chap called Chris in Singapore here who has pictures and videos about this same setup, using the FGRM-222 insert and the Dooya DT52S Motor. His blog post was the final inspiration for me to push the button and go ahead and finally order some kit for myself! Hopefully my series of blog posts will do the same for you!

I plan to also use a wall mounted switch nearby the curtains for opening and closing them, the switch connects to the Fibaro blind control insert, something like these Scolmore Minigrid switches. I couldn’t really find any cheap switches specifically for curtain / blind control with the Up / Down arrow icons or with curtain icons on them. 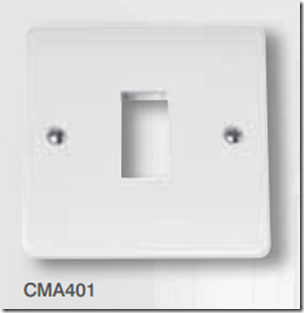 I choose this particular 3 position retractive or momentary switch because I thought this type of switch would be good for use with Curtains and blinds, up for open and down for closed. The default position of the switch is in the middle (off). When you push the button up or down and release, the button automatically then returns to the middle position hence the name retractive.

With these Dooya motors the curtains can not be manually pulled to start an open or close operation, unlike some of the Somfy curtain track motors which allow you to do this. I would say this is the only feature I would like that I won’t have with this budget project, making a nearby wall switch even more important.

Obviously we will be able to use this wall switch along with the Vera mobile apps on the phones and tablets to open and close the curtains and maybe also use an Aeon Minimote handset as well, if I program one of those. We will also be able to automate the curtains to open and close at certain times of the day and night with scheduled scenes in Vera.

This is the planned wiring diagram, which I borrowed from Vesternet, which I interpret as: 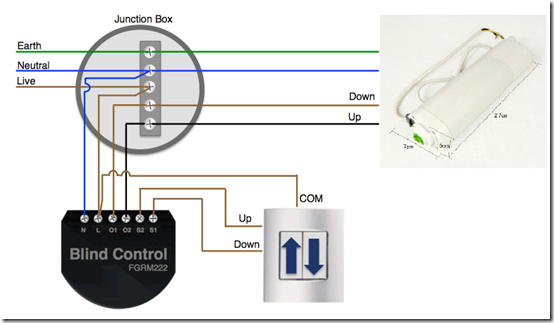 These are the wires coming from the Dooya DT52S motor. Yellow is Earth / Ground, Blue is Neutral and the Black and Brown are for Up / Down, not sure which is which yet. 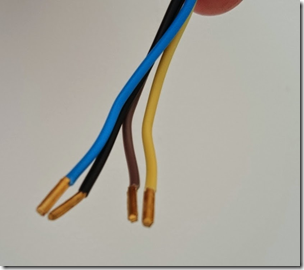 Disclaimer: You should always seek professional advice from a certified electrician regarding installation, as mains voltage can be very dangerous!

Great step by step post on this project. I'm looking into doing a similar setup. I have already contacted Scott Liu about the motor and rails, but being new to Z-wave in general I am having issue sourcing the Fibaro module with a U.S. frequency, and was hoping you might be able to point me in the right direction

I only sell EU Z-wave kit, however I will ask the distributor for you if they know anything about Fibaro products in US frequency. I'll let you know..

This looks very interesting to me. My curtains are into a bay window, though, so a rail or track would need to bend around two corners. Does this track bend at all, it looks from your window photo that it may be straight only?

Yes my track is just a straight track, you can get curved ones, speak to Scott at Friend Group he should be able to advise you, if you do make a purchase with them don't forget to mention you were referred by this blog. I can supply the Fibro modules or any other Z-wave Euro devices. Regards

Here is the contact page for Scott at Friend Group:

I've messaged him asking for more details about curved tracks and told him to expect your enquiry.

Thank you for this great post.
I just ordered 2 pieces of the curtain track from "Friend Group" and made sure to mention the referral to Scott, I thought I needed to let you know.

Can you do pause when closing or opening the blind?

Yes when I press the button on the wall the curtains stop at that position.