Transcoding VS Remuxing? MS where's the native support? Have your say!

Ever since I got in to Media Center DVD playback and now Blu-ray and MKV playback on extenders has really really frustrated me! In the fact that they don't support it!

I still can't believe in this day and age, that we are unable to natively play ripped DVD's on extenders. I was amazed MS even gave us native DIVX/XVID support in 7MC MCX on the XBOX 360. After 18 months of moaning about it I was happy to see they eventually did it and I'm sure other people were waiting a hell of a lot longer than I was.

It's not a technical limitation but must be political one with the big Hollywood content providers, but as a comsumer I don't care frankly. I've purchased my DVD and Blu-ray's discs, I should have the right to consume them in my home with my family anyway I choose and on any device.

What are the current options for DVD playback on extenders ? Transcoding where the VOB's are remuxed on the fly to MPG. Transcode 360 is a life saver no doubt but it's just not reliable enough for my liking. Transcode 360 can be used with MC, My Movies and Media Browser and gives it more scope over the newer Vaders's transcoder which only works with the Vista Media Center native DVD Library, I could never get it working on the native 7MC Movie Library and am not aware of anyone having done so ?

So transcoding in my mind is flakey at best and not 100% reliable. Then there is talk of this new native transcoding in 7MC. The ideal idea is that anything I can play in 7MC on the PC can be transcoded to the extenders natively. I have yet to have seen this in action. I'm not sure anyone really knows how and when or if this native Win7 transcoding occurs? What's the process that runs?

It certainly doesn't transcode my MKV's or DVD Vob's to my extenders so is it even there? And the newly added DIVX/XVID support on the XBOX 360 MCX seems native to the XBOX side to me via a dashboard update which re-appeared in the 7MC MCX the first time when trying to play DIVX/XVID on the 7MC MCX.

What are the other options then? The best I have found for DVD is remuxing the container to DVR-MS using Video Redo Plus for seamless DVD playback (Main Movie Only) on extenders with full FFWD capabilities. And TSMuxer to remux MKV's in to M2TS files which 7MC natively supports.

It's still all a mess it's still way too much hard work for the average guy in the street when will it ever end ???
Posted by CW-KID at 09:52 5 comments:

I love Media Browser but this is a show stopper!

My new favourite MCE add-in has to be the very slick looking Media Browser add-in.

It beats the pants off Microsoft's new Movie Library offering in 7MC and really does put them to shame, but having lived with Media Browser for a while and having recently tested out my extenders again properly I have a big wish list item for the Media Browser developers!

It seems Media Browser does not support both DVD rips VOB's in VIDEO_TS folders and DVR-MS / MPG files, as does the old My Movies UI for example.

If you have a movie folder E.G.

And in that folder you have a DVR-MS file which is a copy of the main movie only for native extender playback.

And then you have a subfolder, which contains the entire ripped DVD disc in VOB's.

In the original My Movies UI it knows if you are on an extender or on the Media
Center PC. If your on the PC it will play the ripped VOB's in the
VIDEO_TS folder and you get the full DVD movie experience, menu titles
and extra's etc. If your on an extender if knows to play just the DVR-MS
file instead.

Media Browser does not do this and it really needs to!

If you have Transcode 360 installed with Media Browser and you play a film from Media Browser on the extender, it starts transcoding the VOB's regardless and does not play the
extender friendly DVR-MS file you already have present in that folder.

This is a massive show stopper for me now with Media Browser. If you would also like to see this functionality added please head over to the Media Browser forums and voice your request. No doubt the dev's over there are doing a fantastic job and I hope they are open to new suggestions.

Transcode360 works but is too flakey, the better transcoder created by Vader only works with the native VMC DVD Library so has it's limits currently, so a solid solution is needed which isDVR-MS files for extenders and WTV files moving forward in to 7MC.

DVR-MS files are quickly and easily created from DVD rips with Video Redo Plus. The My Movies UI is so dated now, so I really hope the Media Browser developers can add this functionality?

Apparently this issue has been raised before on the forums in the past but has not be deemed a priority ?

Looking forward to your comments on this one!

A look at the Shuttle D10 with 7” touch screen

I’ve been testing out a little Shuttle D10 which also has a 7” touch screen, for the last week or so and I do really quite like this PC. As you can see from the picture the Shuttle is very small and compact and would make a great living room PC.

The touch screen works fairly well with Media Center, if you know where to press your finger to hit the hidden navigation arrows that are on the VMC start menu, but my main disappointment was that my new favourite VMC add-in Media Browser does not support touch, so when using Media Center on the touch screen, I had to revert back to the older looking My Movies UI.

The machine had no issues playing 4 movies at the same time. Two DVD rips I had converted to DVR-MS using VideoRedo and two XVID movies. Under this load the CPU utilization was between 10 - 19% and the RAM usage was around 1.42GB.

I was also able to play the same movie at the same time on multiple extenders (I tried this with an XVID and a DVR-MS Movie) which I’ve never tried before and didn’t know you could do so that was pretty cool!

The only thing I’m not sure about is how to get the virtual on-screen keyboard back on and working again, after I re-formatted the drive to do a clean Vista install and after installing all the drivers and utilities from the Shuttle support website I still have no on-screen keyboard popping up. Anyone with a D10 know how to sort this out?

Overall a solid little machine that handled everything I threw at it, HD Movie playback on the PC itself was smooth, I played a few MKV movies I had on the disk drive and all looked well, I was also able to transcode the MKV’s to the extenders using Transcode 36o. It worked but it’s not ideal and I will be looking in to ways to convert MKV’s to DVR-MS or WTV or something.

I took a few photos which you can see below: 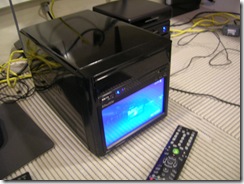 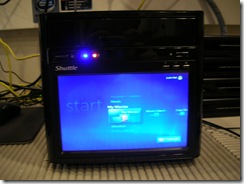 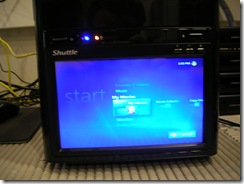 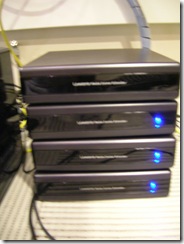 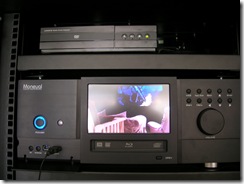 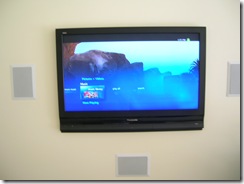