Add a Google Chrome icon in to Windows Media Center

Download the latest version of Relaunch from here currently version 202. The utility is a standalone .exe file that requires no installation so you can save it and run it from any folder on your PC, I created a folder for it under C:\Program Files (x86)\Relaunch an saved the .exe in to here.
Right click the .exe and run as Administrator

We are going to create our own new custom tile.

Under App to Launch select Custom

Trigger: Change this to Close App (The GreenButton) trigger seems to be problematic and kept crashing Chrome on my PC.)

Uncheck Fullsceen unless you want Chrome to be launched in to fullscreen?

URL: You can add any URL in to the URL field this is the webpage that will be loaded when Google Chrome is launched.

Name: Google Chrome (Name that appears under the tile in Media Center)

Image: Browse to the path of your .PNG icon image for this custom tile. I just found one from a Google image search, if you are too lazy you can download my icon below from my SkyDrive.

Once all the fields have been populated correctly click the Add button.
Note: I recommend you close down Media Center whilst doing this.
After clicking add your new custom tile called Google Chrome will be listed under Current Tiles. You can select these current tiles and click the Remove button to remove the tile from Media Center. 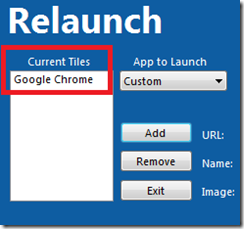 Now open Media Center and navigate to the Extra’s Library your new Google Chrome icon will be in there. 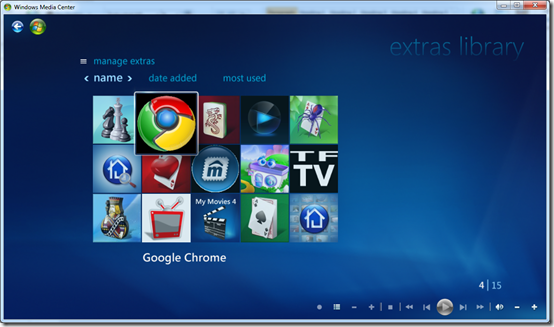 You can then use a program like Media Center Studio if you wish to move the icon on to one of the menu strips in Media Center, I moved it to the Extra’s menu strip. 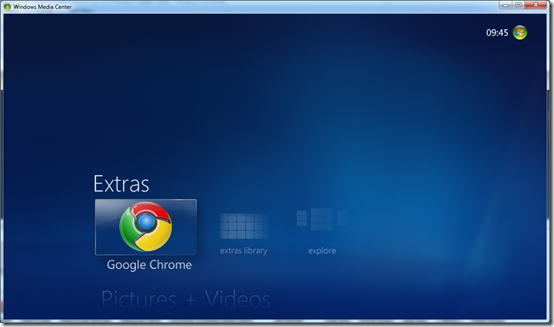 How Relaunch works is it creates an MCL file under:
C:\Users\YourUsername\AppData\Roaming\Media Center Programs

Below you can see the code within the MCL file:

You can download my Google Chrome .PNG icon from here
Now because we selected Close App as the trigger when we setup the tile in Relaunch you need some method of exiting Google Chrome on the TV screen to be returned to Media Center. If you are using a wireless keyboard/mouse or a smart phone mouse cursor app you can just click the Red X in the top right hand corner to exit Chrome and Media Center will be restored.

I have previously programmed my Logitech Harmony universal remote control with a custom button that sends a Ctrl+F4 command to close applications down.

Following on from Ian’s post the other day, my next blog post will be about the new www.youtube.com/tv user interface for YouTube on your big screen, I will also be using Relaunch to create an icon in Media Center to launch this YouTube TV interface in to Chrome. I will also cover some of the setup and how to connect your Android and iOS device for remote control of the YouTube TV UI.

UPDATE: The below is from the developer of Relaunch:

One problem... when the relauncher app closes Chrome, it doesn't do it gracefully. When I start Chrome the next time, it displays a ribbon at the top that says that Chrome didn't close correctly. Any way around this?

I think I had that problem when the trigger was set to GreenButton change this to Close App instead, this stopped Chrome from crashing for me.

I just found your blog and I love it!

I am having a problem with Relaunch: Internet Explorer and "Program" are my only two "with" options. Do I need to set something up to get Chrome to show up?

Hi,
i have problems bei installing it.
I can run the app and run add, but nothing apears under the Relaunch-folder.

Hi Stuart, great blog! i can get the youtube and chrome tiles working in MC on my PC but not on my TV? thanks Robert

hi, also having the problem with chrome not showing up in the "with" drop down menu (yes it is installed). any thoughts?